A case study on the TorchServe inference framework optimized with Intel® Extension for PyTorch*.

Getting a strong out-of-box performance for deep learning on CPUs can be tricky but it’s much easier if you’re aware of the main problems that affect performance, how to measure them and how to solve them.

GEMM (General Matrix Multiply) run on fused-multiply-add (FMA) or dot-product (DP) execution units which will be bottlenecked and cause delays in thread waiting/spinning at synchronization barrier when hyperthreading is enabled - because using logical cores causes insufficient concurrency for all working threads as each logical thread contends for the same core resources. Instead, if we use 1 thread per physical core, we avoid this contention. So we generally recommend avoiding logical cores by setting CPU thread affinity to physical cores via core pinning.

Multi-socket systems have Non-Uniform Memory Access (NUMA) which is a shared memory architecture that describes the placement of main memory modules with respect to processors. But if a process is not NUMA-aware, slow remote memory is frequently accessed when threads migrate cross socket via Intel Ultra Path Interconnect (UPI) during run time. We address this problem by setting CPU thread affinity to a specific socket via core pinning.

In this blog, we’ll walk you through the important runtime configurations you should be aware of from CPU Performance Tuning Guide, explain how they work, how to profile them and how to integrate them within a model serving framework like TorchServe via an easy to use launch script which we’ve integrated 1 natively.

We’ll explain all of these ideas visually from first principles with lots of profiles and show you how we applied our learnings to make out of the box CPU performance on TorchServe better.

Avoiding logical cores for deep learning workloads generally improves performance. To understand this, let us take a step back to GEMM.

The majority of time in deep learning training or inference is spent on millions of repeated operations of GEMM which is at the core of fully connected layers. Fully connected layers have been used for decades since multi-layer perceptrons (MLP) proved to be a universal approximator of any continuous function. Any MLP can be entirely represented as GEMM. And even a convolution can be represented as a GEMM by using a Toepliz matrix.

Returning to the original topic, most GEMM operators benefit from using non-hyperthreading, because the majority of time in deep learning training or inference is spent on millions of repeated operations of GEMM running on fused-multiply-add (FMA) or dot-product (DP) execution units shared by hyperthreading cores. With hyperthreading enabled, OpenMP threads will contend for the same GEMM execution units. 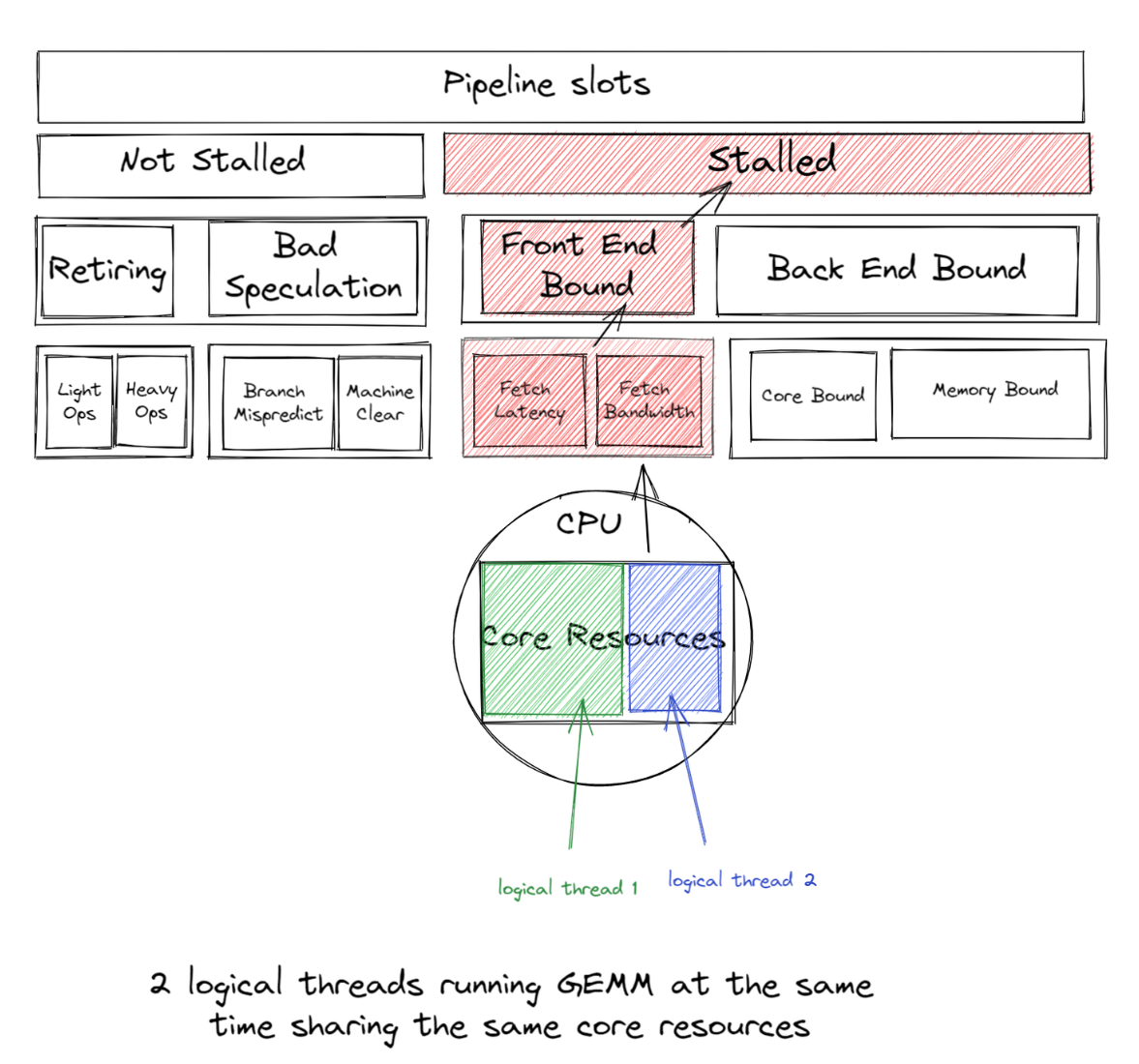 We’ll use the following example of feeding ResNet50 dummy tensor:

Throughout the blog, we’ll use Intel® VTune™ Profiler to profile and verify optimizations. And we’ll run all exercises on a machine with two Intel(R) Xeon(R) Platinum 8180M CPUs. The CPU information is shown in Figure 2.1.

We can visualize this by running htop command on Linux as shown below.

The Top Hotspots section of the execution summary indicates that __kmp_fork_barrier took 4.589 seconds of CPU time - during 9.33% of the CPU execution time, threads were just spinning at this barrier due to thread synchronization. 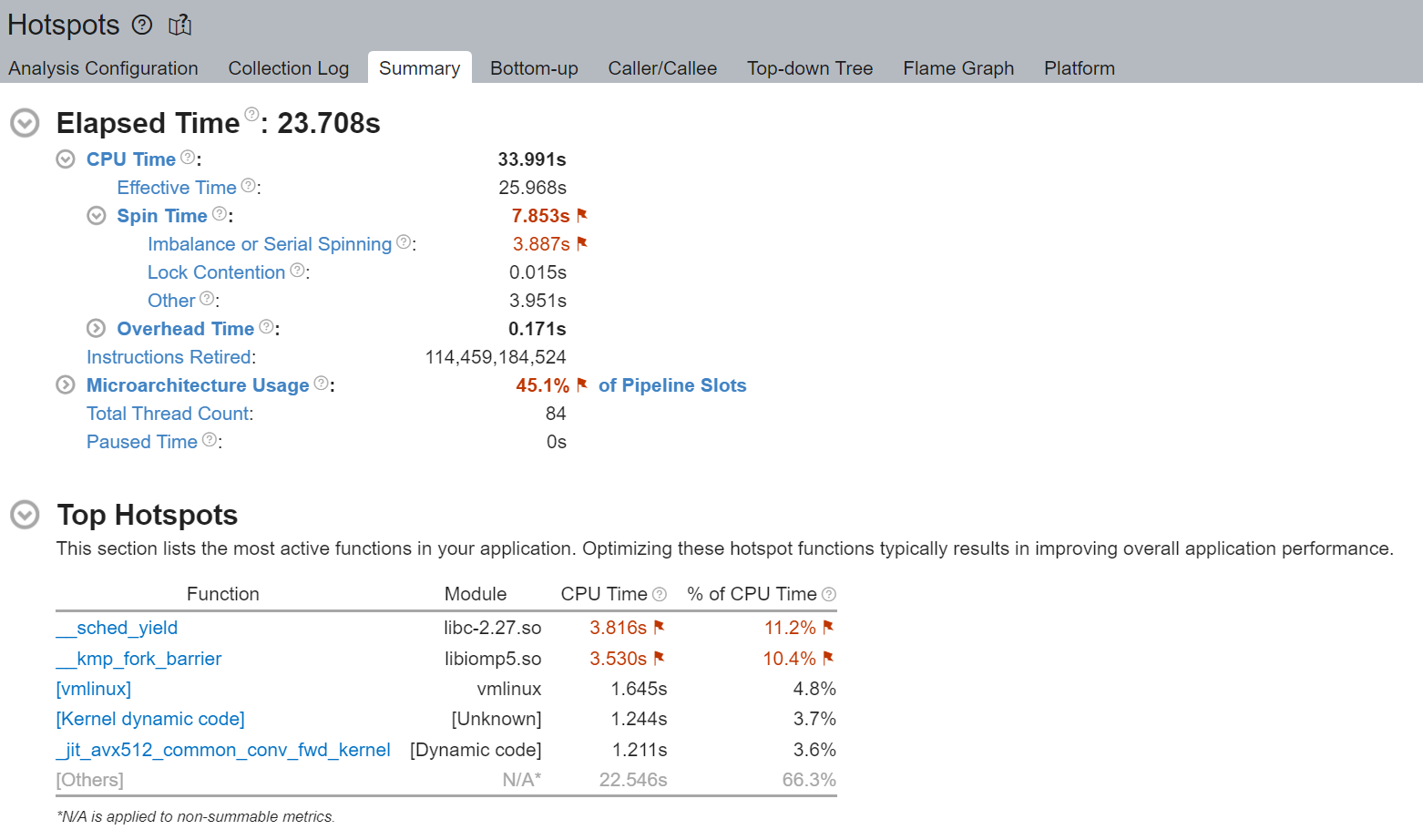 We first note that the execution time dropped from 32 seconds to 23 seconds by avoiding logical cores. While there’s still some non-negligible Imbalance or Serial Spinning, we note relative improvement from 4.980 seconds to 3.887 seconds.

By not using logical threads (instead, using 1 thread per physical core), we avoid logical threads contending for the same core resources. The Top Hotspots section also indicates relative improvement of __kmp_fork_barrier time from 4.589 seconds to 3.530 seconds.

We generally recommend binding a process to a local socket such that the process does not migrate across sockets. Generally the goal of doing so is to utilize high speed cache on local memory and to avoid remote memory access which can be ~2x slower. 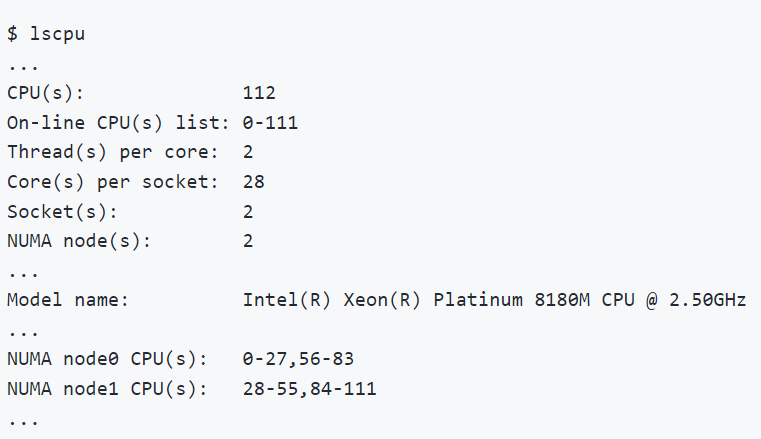 Users can get their CPU information by running lscpu command on their Linux machine. Figure 2.1. shows an example of lscpu execution on a machine with two Intel(R) Xeon(R) Platinum 8180M CPUs. Notice that there are 28 cores per socket, and 2 threads per core (i.e., hyperthreading is enabled). In other words, there are 28 logical cores in addition to 28 physical cores, giving a total of 56 cores per socket. And there are 2 sockets, giving a total of 112 cores (Thread(s) per core x Core(s) per socket x Socket(s)). 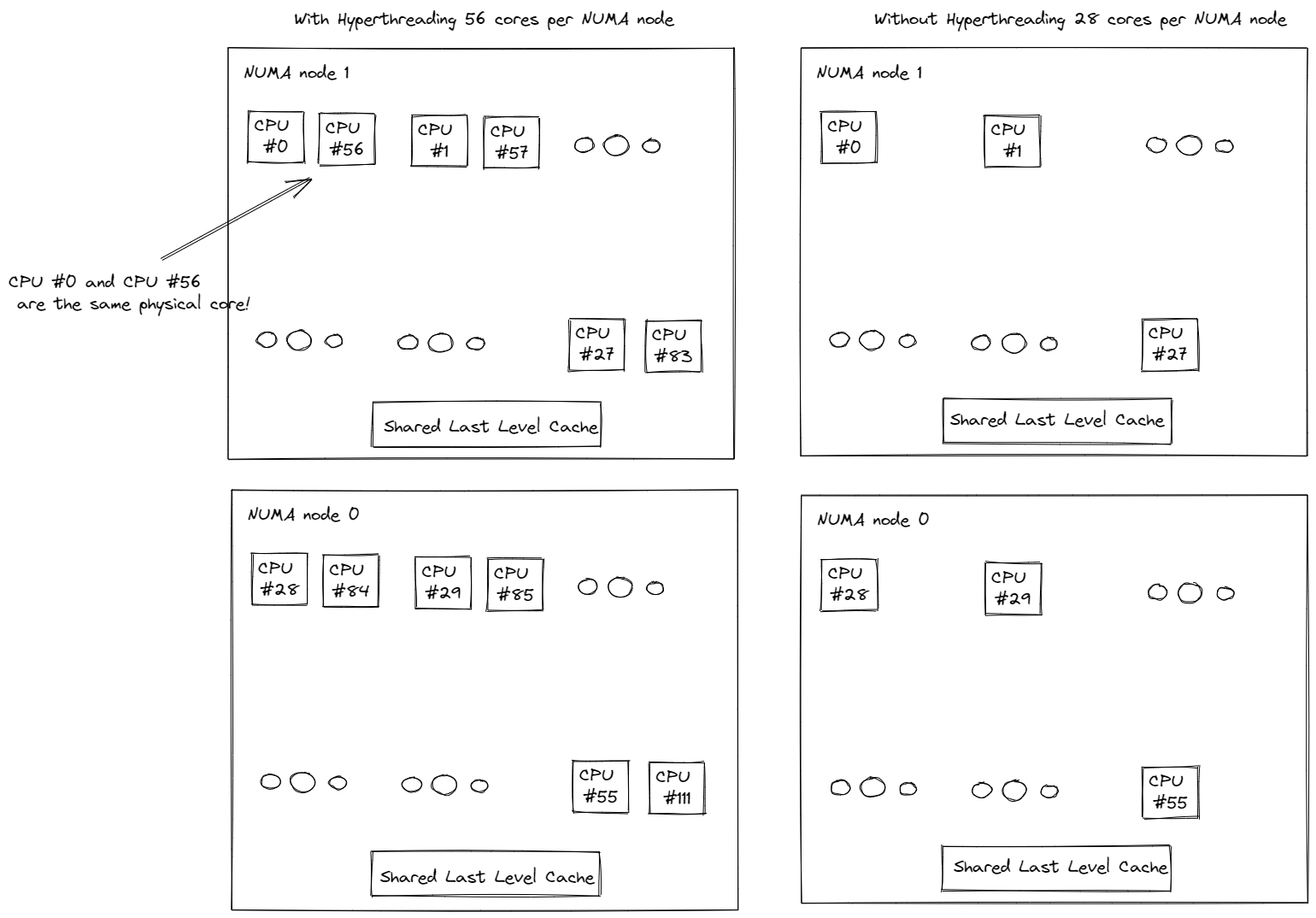 We’ll reuse the ResNet50 example above.

Figure 3. CPU usage of non NUMA-aware application. 1 main worker thread was launched, then it launched a physical core number (56) of threads on all cores, including logical cores.

Figure 4. compares local vs. remote memory access over time. We verify usage of remote memory which could result in sub-optimal performance.

Pinning threads to cores on the same socket helps maintain locality of memory access. In this example, we’ll pin to the physical cores on the first NUMA node (0-27). With the launch script, users can easily experiment with NUMA nodes configuration by simply toggling the --node_id launch script knob.

1 main worker thread was launched, then it launched threads on all physical cores on the first numa node.

As shown in Figure 6., now almost all memory accesses are local accesses.

When running multi-worker inference, cores are overlapped (or shared) between workers causing inefficient CPU usage. To address this problem, the launch script equally divides the number of available cores by the number of workers such that each worker is pinned to assigned cores during runtime.

For this exercise, let’s apply the CPU performance tuning principles and recommendations that we have discussed so far to TorchServe apache-bench benchmarking.

We’ll use ResNet50 with 4 workers, concurrency 100, requests 10,000. All other parameters (e.g., batch_size, input, etc) are the same as the default parameters.

After this exercise, we’ll have verified that we prefer avoiding logical cores and prefer local memory access via core pinning with a real TorchServe use case.

The base_handler doesn’t explicitly set torch.set_num_threads. Hence the default number of threads is the number of physical CPU cores as described here. Users can check the number of threads by torch.get_num_threads in the base_handler. Each of the 4 main worker threads launches a physical core number (56) of threads, launching a total of 56x4 = 224 threads, which is more than the total number of cores 112. Therefore cores are guaranteed to be heavily overlapped with high logical core utilization- multiple workers using multiple cores at the same time. Furthermore, because threads are not affinitized to specific CPU cores, the operating system periodically schedules threads to cores located in different sockets.

4 main worker threads were launched, then each launched a physical core number (56) of threads on all cores, including logical cores.

We observe a very high Core Bound stall of 88.4%, decreasing pipeline efficiency. Core Bound stalls indicate sub-optimal use of available execution units in the CPU. For example, several GEMM instructions in a row competing for fused-multiply-add (FMA) or dot-product (DP) execution units shared by hyperthreading cores could cause Core Bound stalls. And as described in the previous section, use of logical cores amplifies this problem. 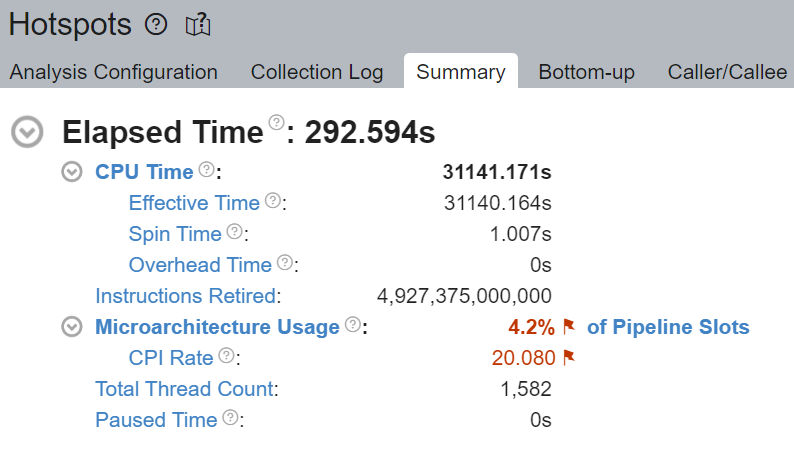 An empty pipeline slot not filled with micro-ops (uOps) is attributed to a stall. For example, without core pinning CPU usage may not effectively be on compute but on other operations like thread scheduling from Linux kernel. We see above that __sched_yield contributed to the majority of the Spin Time.

Without core pinning, scheduler may migrate thread executing on a core to a different core. Thread migration can disassociate the thread from data that has already been fetched into the caches resulting in longer data access latencies. This problem is exacerbated in NUMA systems when thread migrates across sockets. Data that has been fetched to high speed cache on local memory now becomes remote memory, which is much slower. 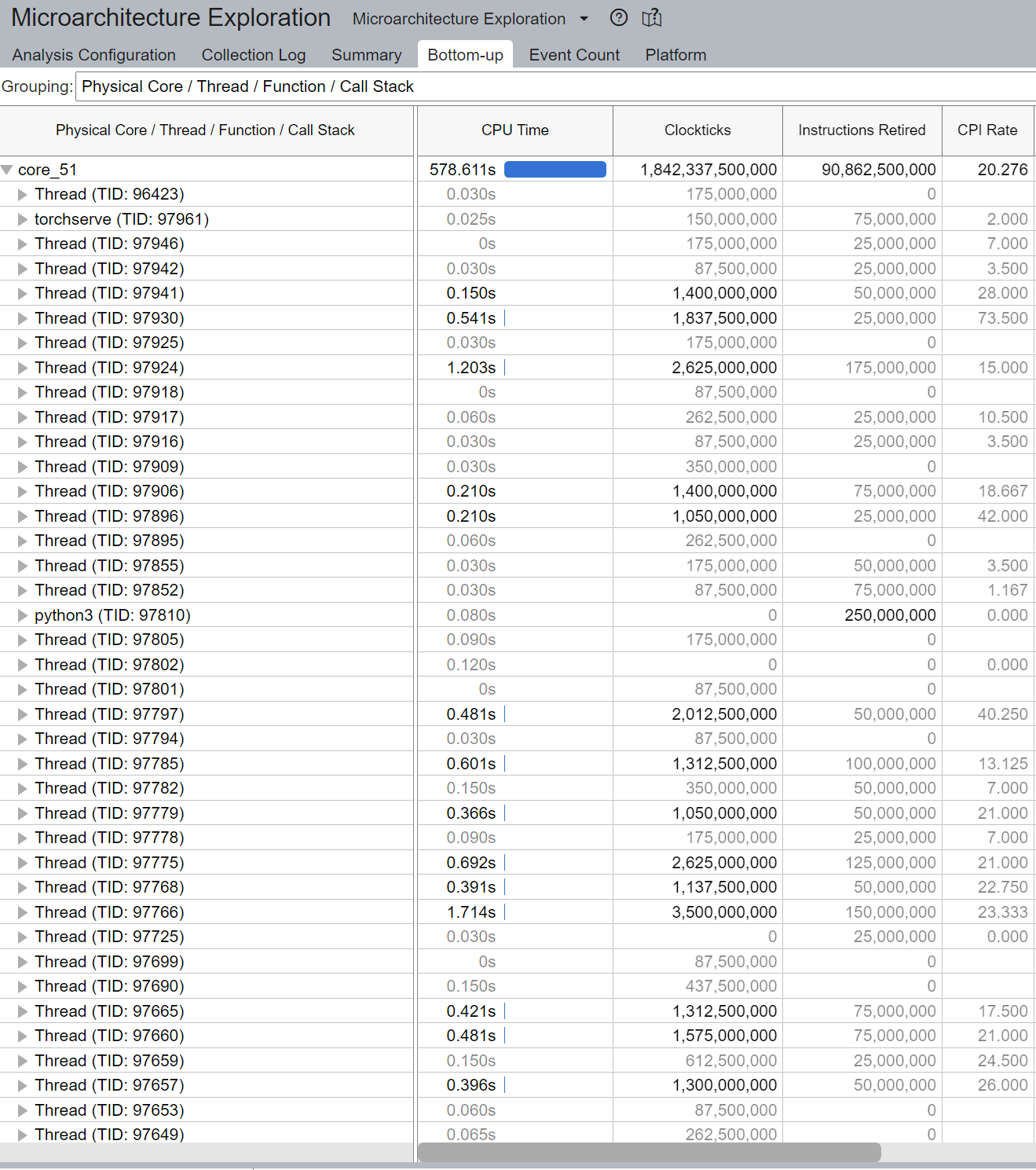 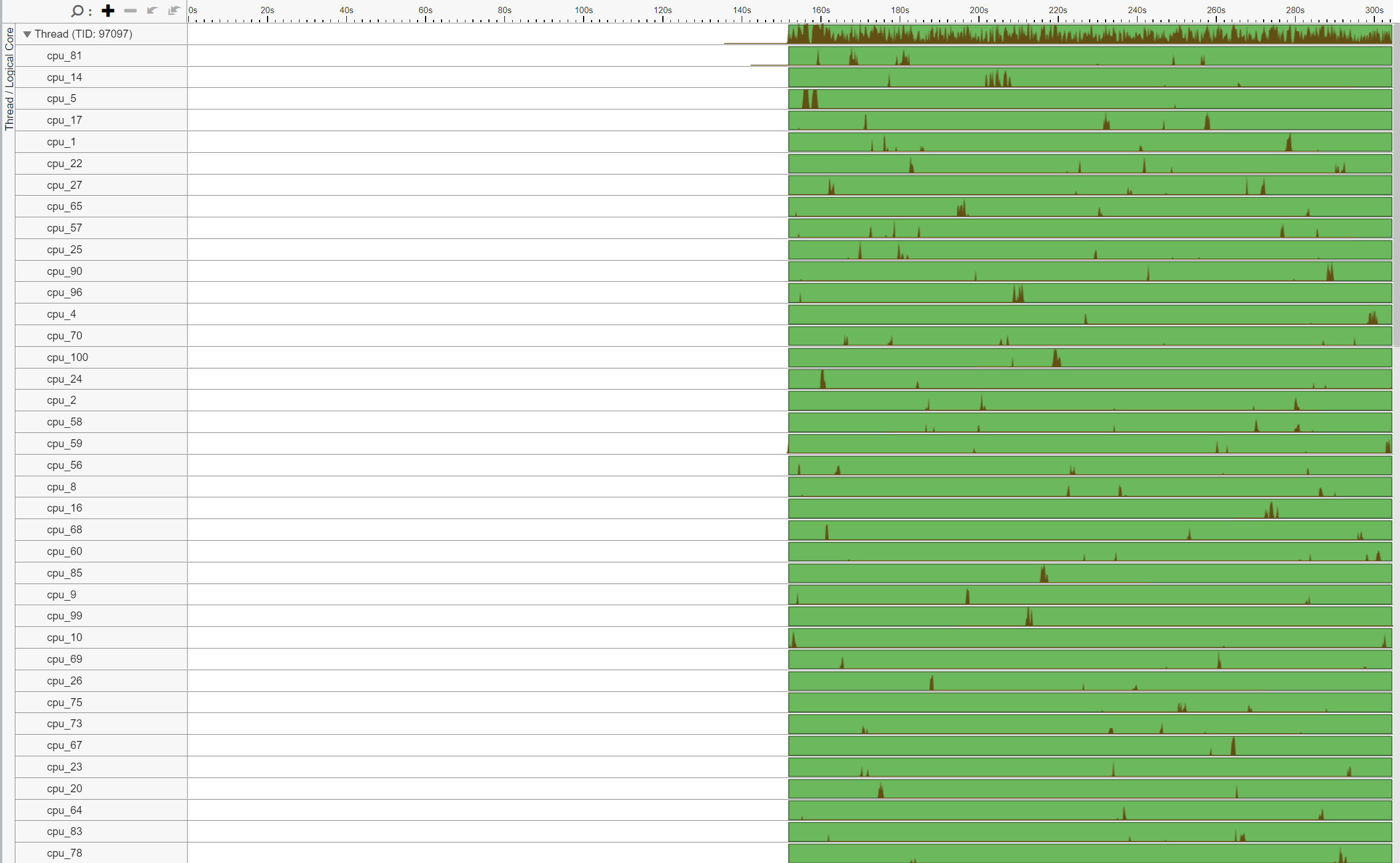 Compare local vs. remote memory access over time. We observe that about half, 51.09%, of the memory accesses were remote accesses, indicating sub-optimal NUMA configuration.

For an apple-to-apple comparison with launcher’s core pinning, we’ll set the number of threads to the number of cores divided by the number of workers (launcher does this internally). Add the following code snippet in the base_handler:

As before without core pinning, these threads are not affinitized to specific CPU cores, causing the operating system to periodically schedule threads on cores located in different sockets.

4 main worker threads were launched, then each launched a num_physical_cores/num_workers number (14) of threads on all cores, including logical cores.

Although the percentage of Core Bound stalls has decreased from 88.4% to 73.5%, the Core Bound is still very high. 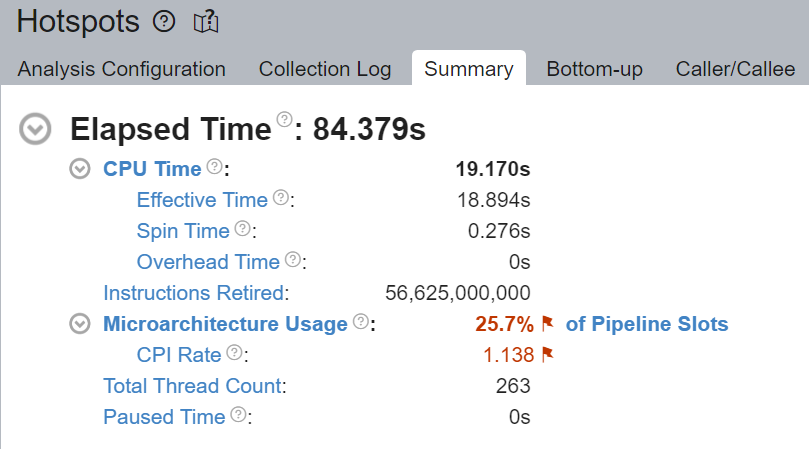 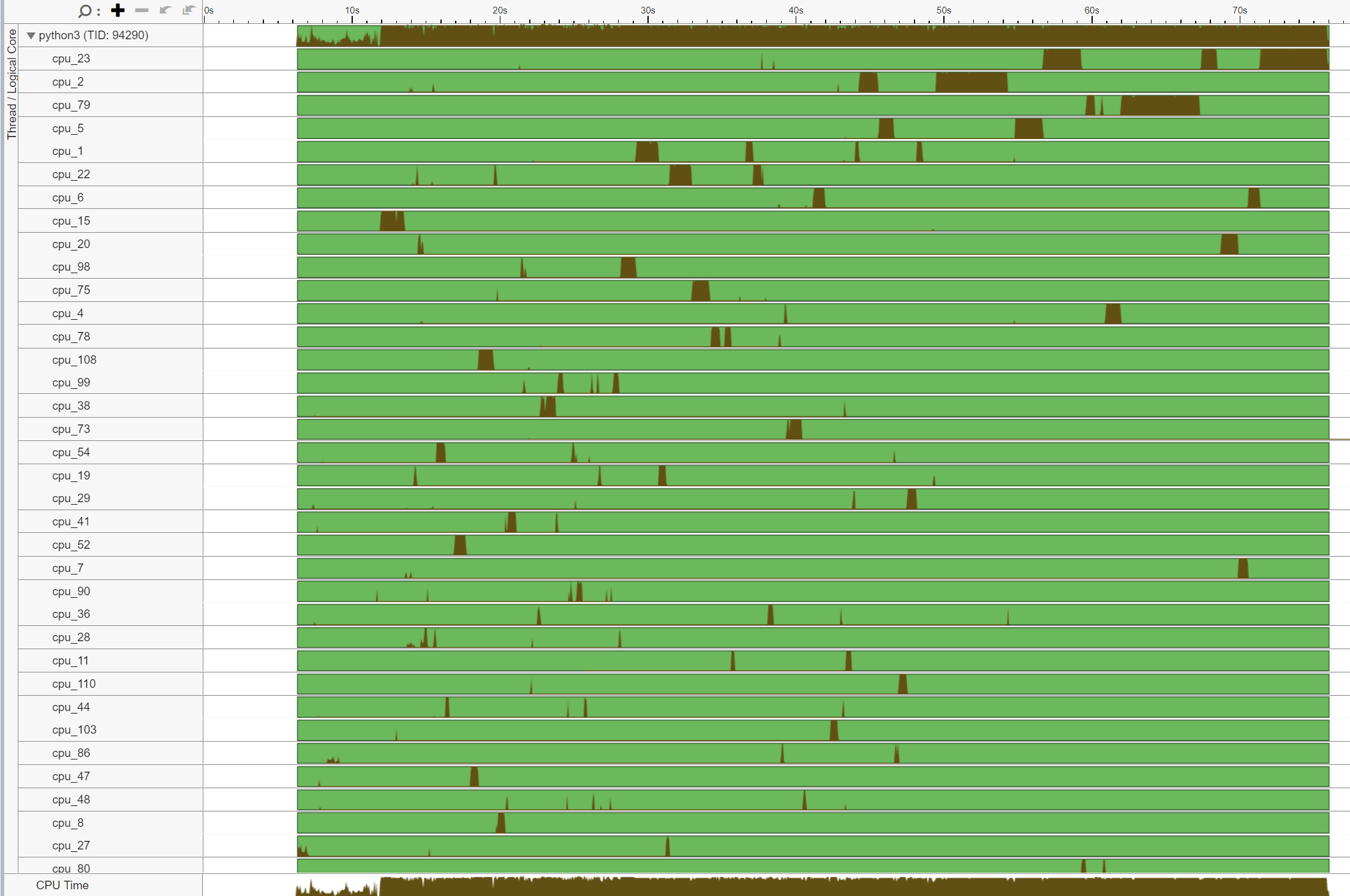 Although an improvement from the original 51.09%, still 40.45% of memory access is remote, indicating sub-optimal NUMA configuration.

4 main worker threads were launched, then each launched a num_physical_cores/num_workers number (14) of threads affinitized to the assigned physical cores.

Core Bound stalls has decreased significantly from the original 88.4% to 46.2% - almost a 2x improvement. 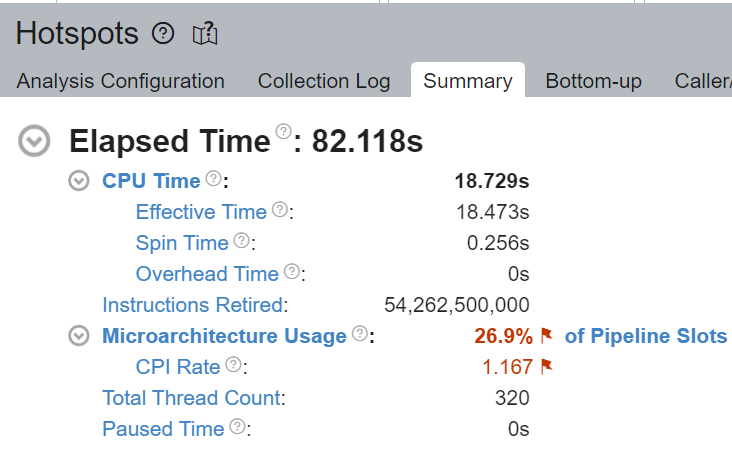 We verify that with core binding, most CPU time is effectively used on compute - Spin Time of 0.256s.

We verify that OMP Primary Thread #0 was bound to assigned physical cores (42-55), and did not migrate cross-socket.

We have walked through some general CPU performance tuning principles and recommendations:

We have visually explained these ideas from first principles and have verified the performance boost with profiling. And finally, we have applied all of our learnings to TorchServe to boost out-of-box TorchServe CPU performance.

These principles can be automatically configured via an easy to use launch script which has already been integrated into TorchServe.

For interested readers, please check out the following documents:

And stay tuned for a follow-up posts on optimized kernels on CPU via Intel® Extension for PyTorch* and advanced launcher configurations such as memory allocator.

We would like to thank Ashok Emani (Intel) and Jiong Gong (Intel) for their immense guidance and support, and thorough feedback and reviews throughout many steps of this blog. We would also like to thank Hamid Shojanazeri (Meta), Li Ning (AWS) and Jing Xu (Intel) for helpful feedback in code review. And Suraj Subramanian (Meta) and Geeta Chauhan (Meta) for helpful feedback on the blog.